Riding Behind the Padre

Riding Behind the Padre:

Horseback Views from Both Sides of the Border 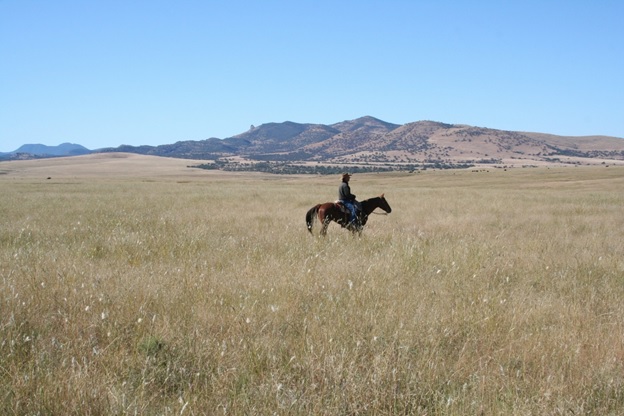 A Book with a Balanced View at the Arizona-Sonora Borderlands

This morning in October, I am helping a friend gather cattle on the south end of the San Rafael valley in Santa Cruz County, Arizona. The monsoon rains were generous this summer and the grasses are tall and seeded out; Arizona cottontop with seed stalks like fuzzy pipe cleaners over an understory of grama grass. The cattle are about a mile distant from where I sit the horse, black dots toward the right mid-ground. In this high desert grassland, they have the look of rightness; they belong here. So does the horse, a 9-year old chestnut mare who knows her job. I call her Cranberry to match her color.

A light breeze stirs waves over the heavy grass, bringing the smell of last night’s rain to mingle with Cranberry’s sweat, a cowboy’s perfume that lodges in my nostrils like a half-forgotten dream. In the background, the Sierra El Chivatito hills of Sonora rise up to a turquoise horizon. Green swaths of junipers flow up the distant canyons and swales toward the hilltops. Humans like horses evolved on the open plains and sight is our strongest sensory power. This landscape’s unblemished long views instills a peace in me from knowing that here the land is still mostly unchanged. To those unfortunates who today dwell in cities and suburbs, such unobstructed views are rare unless they look straight up. Claustrophobia like that breeds a kind of sensual malnutrition: a visceral craving for natural landscapes where one can see long distances unimpeded by concrete, glass, and steel buildings; asphalt and concrete freeways perfumed by the stink of exhaust fumes; airports, parking lots and drive-by shopping malls—places so slick and featureless that human memory has trouble clinging to them, places that inspire no lasting sense of belonging. They are what anthropologist Marc Augé has called “non-places.” Social critic Gertrude Stein described them as placeless places—“Where is No There There.” Even if I were not working cattle, I would gladly ride here just to see. And when I get too old to ride, I’ll drive here and look in.

Today, I could ride into the Chivitos Mountians where the first vaqueros who followed Father Kino in the 1690’s once rode to herd their cattle, sheep and goats. Except that the border fence shielding the United States from Mexico (or visa versa) blocks the way. The book’s photo cover above was taken when a barbed wire fence spanned the border east to west between concrete monuments. In those times gone by, neighbors from both sides of the border helped each other during roundups to get the cattle back to their rightful owners. Nowadays, a waist-high barrier built of sturdy railroad track prevents vehicles and cows from crossing over. Even so, these barriers are invisible from where I sat the horse this morning.

Closer up, the barriers still do not block the stunning views. Wildlife can cross under on their ancient migration routes, but cattle do not. Recently, electronic surveillance and cell phone towers have been added to alert the nearby Border Patrol station when border crossers are detected or when local ranchers and rural residents call in for help. These measures have reduced border crossings and narcotics smuggling to record lows. 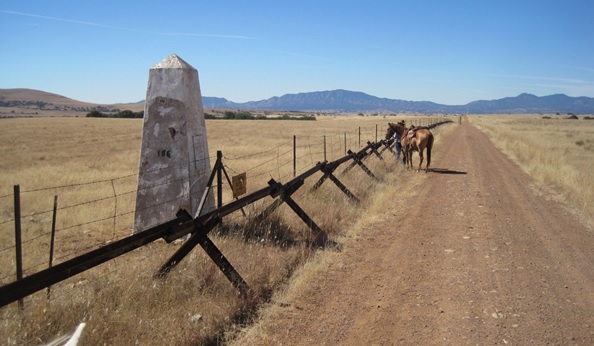 And yet, President Donald Trump is building his “big, beautiful, new wall” spanning the entire 2000 mile border. The structures under construction today are 30 feet tall steel spans anchored in concrete and illuminated with electric flood lights. A 60 foot wide improved patrol road follows the wall inside a 150 foot wide area restricted for Border Patrol or military uses. Today, that wall is under construction on 19.2 miles east of Douglas in Cochise County and on 63 miles going west from Lukeville in Pima County toward Yuma, AZ. Construction costs exceed $20 million per mile, with no money allocated for vegetation salvage or remediation after the wall is completed. Maintenance costs will add multiple millions of dollars annually.

The massive new wall speaks volumes about Trump’s irrational belligerence and fear of our nearest neighbor to the south, as if we were like the Israeli Jews and the Palestinian Arabs and needed a West Bank Wall to separate mortal enemies. The truth is that Mexico is our 3rd largest trading partner world-wide and the near ancestral homeland of 31% of Arizona’s citizens; 17% nation-wide. Most, but not all, ranchers and local residents do not want the new walls. They say that what is there now is working okay. They do not want their homeland trashed and militarized any further. Those who need more help can be protected by stationing the Border Patrol in advanced bases near the trouble spots, as in southeastern Cochise County and elsewhere. Their name, Border Patrol, implies that they will guard the border for those who live on the edge.

Worst yet, the wall does not confront the larger problems on the border: drug and people smuggling and immigrant asylum seekers fleeing the violence and poverty of their homelands in Central America and Mexico. Most of the deadly illegal narcotics like fentanyl, opioids, cocaine and heroin are brought into the U.S. through legal ports of entry hidden in myriad ways, or by mail and courier services, this according to the U.S. Drug Information Agency. In times past, marijuana smugglers were a problem in my area but that has all but disappeared with increased enforcement and its legalization in the U.S. The Trump administration’s overall strategy against our illegal narcotics crisis, if they have one, is limited to more walls, more military on the border and increased law enforcement.

Today, most illegal immigrants in the U.S. come from legal travelers who over-stay their visas, while the asylum seekers come to the ports of entry to await their immigration hearings. Or they turn themselves in to the Border Patrol and are sent to internment camps in the U.S. or in Mexico. Meanwhile, Trump’s belligerent folly “is a damaging non-solution to America’s serious problems on the border that have not been adequately thought out, let alone confronted with stated, rational, and defended policies to solve them.” Take a look at our “Hidden Costs of Trump’s Big, Beautiful Wall” on this web site for a larger picture of the critical needs like the opioid epidemic that the billions of dollars wasted on the wall could address. To that waste, which is severe, we have to add the destruction of our land, cultural icons, and view sheds.

To someone born and brought up in New York City and lives his life on golf courses and in TV reality shows, and more recently, in the chaos of our national’s capital, such devastation is inconsequential. But to the native place-based cultures like those who live and work in the American West, these assets are priceless. 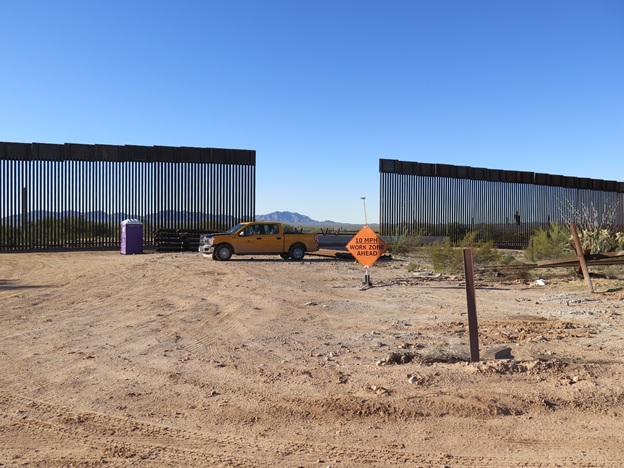 Closing the Door on Neighborliness

For copies of Riding Behind the Padre: Horseback Views from Both Sides of the Border, contact the author at www.richardccollins.com, or in Tucson at Antigone Bookstore on 4th Ave, or Amazon.com/books. All proceeds from the sale of the book are donated to the Kino Border Initiative, a refugee relief organization of the Catholic Church that provides food, safe lodging, and other assistance to those who are stranded in Nogales, Sonora. The book has been translated into Italian (Kino was an Italian-born Jesuit) and Spanish, and presented to Pope Francis. It was also the basis for the documentary film Viva Kino: Crossing the Desert without Borders available on-line through Vimeo and Amazon.com, subtitled in English.

What readers say about Riding Behind the Padre:

“From his saddle, Collins, a Sonoita rancher and Arizona native, sees the border region much differently from most American, even those living north of the line. Collins sees a rich region and a people who share common geography, history and concerns.”

“This is no diatribe. It is a revelation by a border rancher of the history, cultural diversity, politics and economics certain to give its readers a reasoned understand of what’s taking place on both sides of the border. Riding behind the Padre is a superb book!

“Riding Behind the Padre is a wonderful introduction to the history and people of our bi-national region… It’s more than that, however. In my opinion, this book should be read — and absorbed—by every leader, legislator, and policy maker who deals with “border issues.”

“Riding Behind the Padre is a powerful statement on the current affairs in the borderlands area that can only be told by someone who has lived through those issues…. From history enthusiasts to policy makers, this is a must read."