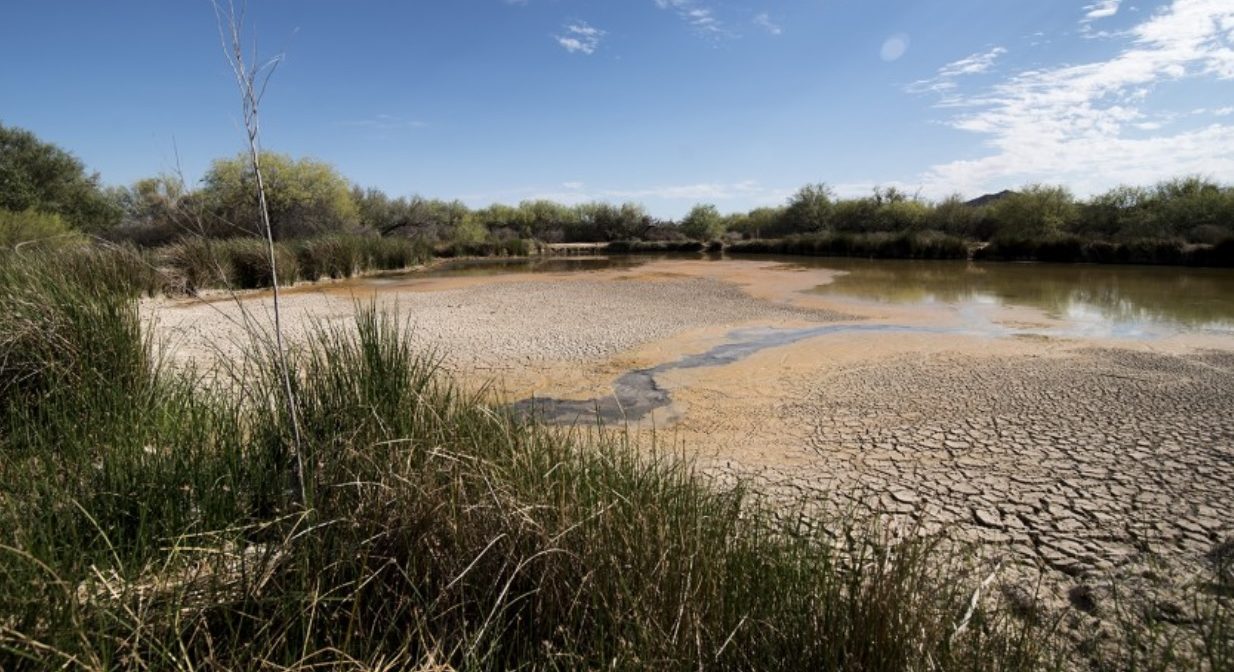 Experts on bird biodiversity in borderlands oases present the first compelling evidence of dramatic wildlife declines triggered by border wall construction, a project that has proceeded without normally required environmental and public reviews.

At least forty-seven species of birds that recently depended upon spring-fed habitats have not been recorded at the Quitobaquito oasis in Organ Pipe Cactus National Monument since the border wall construction began nearly a year ago. This new finding from ecologists and ornithologists suggests that  a quarter of the riparian and wetland birds have temporarily or permanently fled as their habitats have been degraded, or depleted by activities initiated by the Department of Homeland Security, and the Army Corp of Engineers.

The analysis of historic use focuses on a set of avian species that use the wetlands, seeps, mudflats and riparian habitats of Quitobaquito springs within 500 feet of the Arizona-Sonora border. Border wall bulldozing has come within 120 feet of the open water of a spring-fed reservoir. Bird use of the oasis today is compared with that at several points in time-- going back to 1939— just two years after the designation of Organ Pipe Cactus National Monument. Two bird surveys were done in the era when traditional foragers and spiritual practitioners of the Hia c-ed O’odham community still used Quitobaquito for food gathering, residence and sacred ceremonies.  Two hundred thirty-five species of birds have been recorded at Quitobaquito over the last eighty years, making it the richest site for bird diversity in the entire Sonoran Desert network of National Parks and Monuments.

The quarter of the riparian and wetland birds that apparently “vanished” from the oasis since September 2019 may have had their breeding. nesting, feeding, wading or perching activities reduced by the unprecedented amount of construction, drilling, dynamiting, water pumping and heavy truck traffic happening with earshot and sight of their former haunts.

The data analyzed comes from a half dozen research surveys of Quitobaquito oasis undertaken by professional wildlife biologists working for the National Park Service and other agencies, and from vetted data provided by both ornithologists and expert bird-watchers involved in Audubon Christmas Counts and Ebird postings managed by the Cornell Lab of Ornithology.

Dr. R. Roy Johnson, the dean of riparian ecologists in the Southwest, a University of Arizona affiliate and retired research director for the National Park Service, is one of the contributors to the study. He has conducted ecological studies at Quitobaquito since the 1980s.

“We have seen is a drastic reduction in use by waterfowl, wading birds, hummingbirds, hawks, and songbirds that rely on riparian trees, including cottonwoods and willows, for roosting and nesting habitat, or that rely on insects in or above open water and surrounding vegetation for food. Many of these are migrants that rely on Quitobaquito as one of the few well-watered stopovers in the borderlands. Remove one more stopover in the entire migratory corridor across the vast Sonoran Desert, and you break a link that may have kept the whole migratory chain functioning. The next stopover habitat in this arid region may be dozens of miles or farther away, causing exhaustion, starvation, dehydration, or even death, in migrating birds.”

Of twenty-five hro- and meso-riparian and wetland species of conservation concern that historically used Quitobaquito, only ten of them are known to have visited the oasis over the last year, as border wall construction and groundwater pumping intensified. Of particular concern is the lack of observed visits during the last year by the federally endangered Willow Flycatcher Southwest population.

One ultimate cause of biodiversity loss at Quitobaquito is the decline in water flows from two active springs and several seeps due to groundwater pumping for border wall construction. Most of the remaining water that emerges from the ground is channeled into a pond that is lined to maintain water levels sufficient for the survival of endangered Desert pupfish and Sonoran mud turtles. Diminished availability of both water and plant cover has triggered several species of birds to spend less time at the oasis since the crisis began, or to abandon use of it altogether.

Nevertheless, water withdrawn to build the wall and associated activities apparently resulted in pond levels dipped to two thirds of the historic levels earlier this year, leaving large swaths of barren mud flats before that National Park Service undertook additional actions to stabilize pond levels. Although the pond water level is slowly rising again, only two cottonwoods of any stature remain on the pond edge and the few willows remaining all show signs of drought stress and impending death. These two riparian tree species have been historically important in luring and sheltering dozens of bird species. In addition, noise and dust from heavy truck traffic, destruction of vegetation along a sixty-foot wide swath in the Roosevelt Reserve adjacent to the border, drought and other factors must be taken into account as well.

Jonathan Lutz, Executive Director of Tucson Audubon, had this to say about the crisis at Quitobaquito:

“Birds and wildlife do not recognize political borders - and can often be casualties to decisions made without their needs in mind. The growing border wall on the US-Mexico has proved to be just such a threat. Construction activities, bright lighting, large barren stretches of land, and many other aspects of the border wall, are direct threats to the migratory birds and resident birds of Southern Arizona. The waivers that allow these activities to occur with no environmental review must be overturned and border wall construction halted.”

Dr. Gary Paul Nabhan-- a University of Arizona research scientist who has studied the biodiversity of the Quitobaquito oasis since the 1980s--- offered this caution:

“Desert oases like Quitobaquito in Organ Pipe, Hunter Hole on the Colorado River and the cienega wetlands at San Bernardino National Wildlife Refuge are suffering from the negative effects associated with construction of the border wall. Additional riparian habitats close to the border along the Rio Grande, San Pedro, Santa Cruz and Colorado rivers will soon be affected by the wall construction as well. These activities are adding to the many stresses already affecting these oases, pushing their imperiled wildlife over the tipping point.”

Two other scientists not directly involved in this study— Dr. Rafael de Grenade, an independent environmental consultant and Dr. Larry Stevens, Director of the Springs Institute of the Museum of Northern Arizona--- have recently determined that the plight of Quitobaquito and San Bernardino—are part of a larger crisis affecting oasis wildlife in the Southwest.

“Desert oases are among the most threatened ecosystems on earth… Given the small land area that these spring-fed ecosystems occupy, their importance as quality habitat, migratory rest-stops, biodiversity, [culturally-used] biodiversity, and economic value in arid regions is largely underestimated.”

For their part, Nabhan and Johnson are among the thirty scientists and many Native Nations calling for suspension of the wall near these oases until the desiccation and desecration of the Quitobaquito and other wildlife hotspots are reversed. Nabhan concluded,

“Homeland Security officials must determine means other than a thirty-foot tall wall and excessive pumping of precious spring water to assure border security near these fragile oases. They are literally undermining millions of dollars of investment in conservation measures that the National Park Service and the Fish and Wildlife Service have invested in these sacred sanctuaries over decades. In addition, the very existence of some endangered and threated species is at stake. This is unconscionable.”