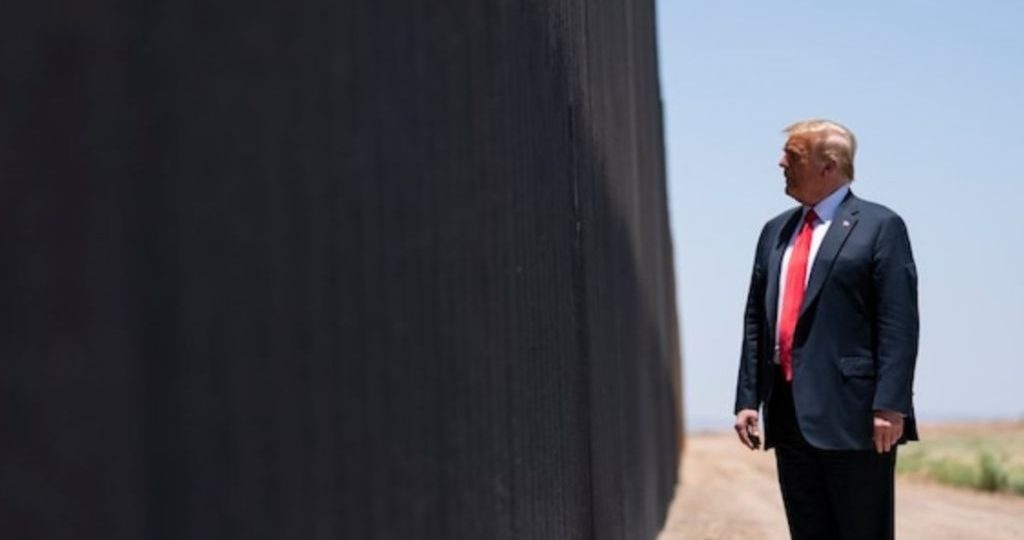 On June 23, President Trump flew to Yuma, Arizona, to celebrate the completion of 200 miles of the U.S.-Mexico border wall.  “It stopped COVID,” he said, failing to mention that our state recently recorded 58,000 cases and 1300 deaths from the disease. An earlier fabrication was Trump’s repeated claim that Mexico was the source of the infection on the border.  The reality is that travelers from the U.S. first seeded the virus which is now raging in both Yuma and its sister city, San Luis Rio Colorado, according to Tim Stellar, investigative reporter for the Arizona Daily Star. Here in our little part of the world, Donald Trump once again showed that he has virtually no adherence to the truth or consistency.  The President fabricates facts and broadcasts half-truths to serve his narrow political objectives when the real truth would serve the nation better.  The net effect has been to divide public opinion into quarreling factions and the gradual erosion of public trust that effective leadership absolutely requires.

As COVID-19 spread globally in January, the president continually and publically downplayed the warnings of infectious disease experts, losing precious weeks to prepare for the pandemic. Consequently, the nation’s health systems lost the chance to contain its spread and had to treat the surge of cases in the crowded, east coast urbans centers.  By mid-March when President Trump ordered a nation-wide shut down, the pandemic had begun to spread into southern and western states. Modeling studies of viral dissemination have estimated that had the nation gone on lockdown one week earlier, more than 30,000 lives could have been saved.  The President’s inattention and pervasive unwillingness to accept proven scientific expertise have elevated the U.S. to the world’s leader in number of cases and deaths due to COVID-19. In April, 2020, we reported in the Arizona Daily Star another instance of Trump going against medical advice when he insisted that hydroxychloroquine, a malaria drug, was a safe therapy for the new virus. This led to bungled, self-medication attempts and fatalities in the Phoenix area.

During the 1960-80s, the U.S. Centers for Disease Control and Prevention (CDC) became the preeminent public health agency in the United States and the world.  Whenever a state health department or a foreign health ministry had a disease problem on which they needed assistance, they called CDC.  Inherent in its ethos was institutional leadership that emphasized sound scientific principals and preparedness as practiced in a team environment comprised of capable individuals.  CDC maintained the respect of political leadership, and equally important, a consistent firewall from political influence. Throughout our CDC careers, we had the good fortune to experience and learn about real leadership in public health defined across a spectrum of infectious and chronic diseases.

Regrettably, the leadership and competence of CDC has been eroded recently, largely attributable to strong political control imposed on it by the highest levels of national government.  CDC leaders and core missions have been chosen more for political considerations rather than scientific competence and national and global health threats. Budget and personnel levels have been reduced.  Areas of scientific inquiry and mission preparedness have been narrowed, especially internationally, leaving America unable to respond adequately to pandemic threats.  Many of the best scientists and physicians have moved on.

In stark contrast to the leadership we experienced personally at CDC, the U.S. has now seen the antithesis in virtually every important leadership attribute. A recent egregious example is the administration’s demand that all COVID-19 statistics be submitted directly to Trump’s administration, undermining CDC historical role in reporting accurate, critical health data to the nation.  Another example: His public refusal to wear masks to slow virus transmission is exactly the opposite of real leadership.

Health experts say wide-spread testing is a crucial step to controlling the spread of the virus and knowing when it is safe to end stay-at-home orders.  Trump opposes increased testing because he falsely claims that it artificially inflates infection rates and deaths. Ignorance is Bliss, perhaps.  Nobel economist Paul Krugman in the New York Times pointed to another motive:  “What the public doesn’t know can’t hurt Trump’s chances for re-election.”  Testing is a critically important tool to define and target individuals and communities in need of intervention. Lack of testing aided the rapid resurgence of the virus in many western states including Arizona.  While tests have increased dramatically in recent weeks, the results still come in too late to be useful for contact tracing and isolating infected individuals.  The government could correct this by paying commercial labs for test results provided on time instead of total numbers of tests completed.

Donald Trump demands absolute loyalty from staff ahead of competence and independent contributions based on their expertise.  The effect has been an erosion of competency and critical skills in his administration.  Examples include the appointment of the politician Vice President Mike Pence to lead the national COVID response team instead of an experienced public health professional like Dr. Anthony Fauci. People who refuse to repeat Trump’s claims are sidelined or leave to preserve their self-respect. Last week as cases and deaths surged in western states, Dr. Deborah Brix, the committee’s medical advisor stated that “the pandemic is entering a new phase.”  Donald Trump immediately and publically called her statement “Pathetic,” presumably because it disaffirmed his false claim that the pandemic was fading. The next day Dr. Brix defended her admirable 40 year career in public health, including the Ebola and HIV crisis.

What is “Pathetic” has been the Trump administration’s incompetent leadership in a pandemic that has not seen its equal since the 1918 Spanish flu that killed millions including my paternal grandfather. This has damaged institutions like CDC and others that Americans rely on for protection from catastrophic diseases.

In August, cases and deaths in the U.S. soared to 5 million and 162,000, respectively.  Our state Arizona is a leader in both categories, per 100,000 population. The President when asked about the staggering death toll by reporter Jonathan Swan, he replied: “It is What It Is,” as if he were closing his weekly TV reality show.   Donald Trump has displayed little empathy or compassion for affected individuals, states and local health departments, or other nations struggling with the disease.  His nationalistic isolationist philosophy is dysfunctional in the interconnected world in which we now must live and actively contribute.  This has impeded the development of the coordinated, nationwide policies and timely actions required to effectively combat COVID-19.  Instead, Trump now blames the World Health Organization for his early inattention, without mentioning the fact that he closed the global health security office in 2017.  To be clear, the Trump administration did not create this pandemic, but its defects and inadequacies have made it measurably worse, including numbers of infections and fatalities.

Leadership in public health programs, when it is effective, is always a group activity; it is not about who has the last word or gets the most attention. COVID-19 is a complex disease requiring the best minds working in a team approach with multiple fields of scientific expertise and administrative skills. They must be supported by competent and consistent leadership at the top.