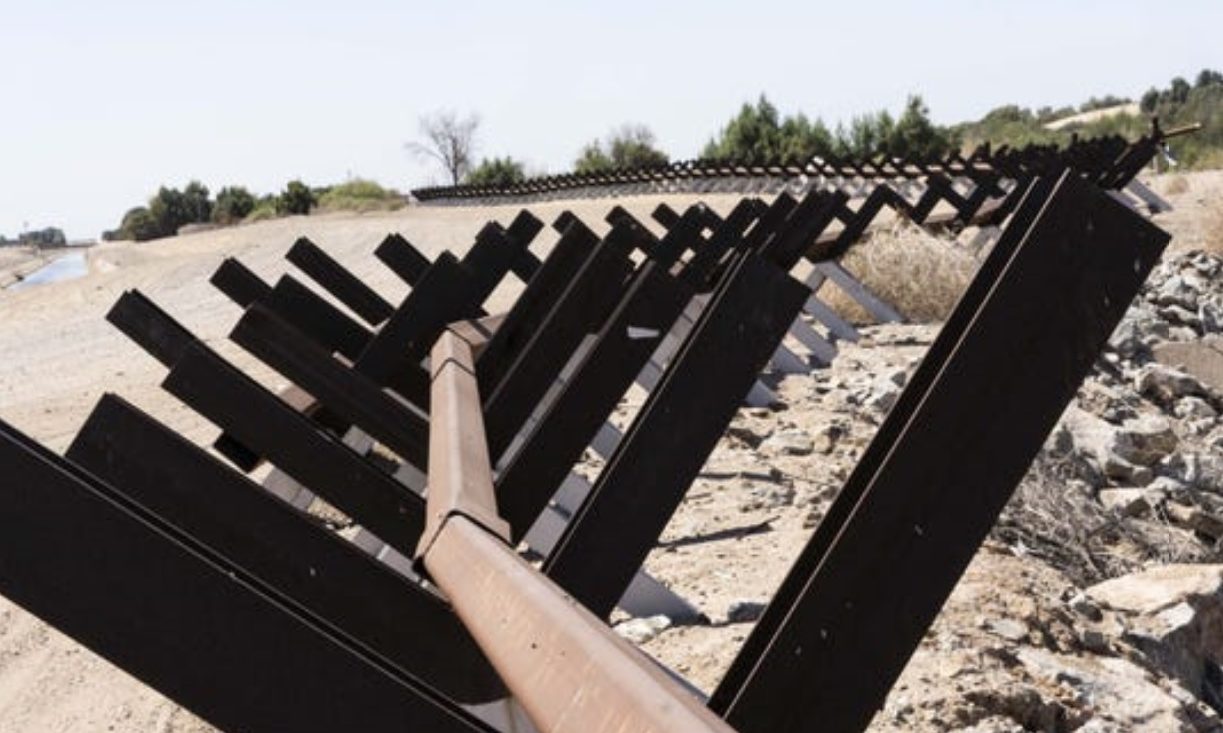 Picture by: Nick Oza, The Republic

Health officials on both sides of the Arizona-Mexico border are working jointly to combat a severe outbreak of COVID-19, the illness caused by the novel coronavirus, along the neighboring border communities of Yuma and San Luis Rio Colorado, Sonora.

The number of confirmed positive cases has grown rapidly since the first person in this border region tested positive in late March. Since then, infection rates have swelled in Yuma and San Luis Rio Colorado, despite their relatively small size.

The binational urban area has a combined population of about 400,000 residents, split evenly between both sides of the border. But they're both largely rural communities, meaning they have fewer resources to work with. For example, each city has only one major hospital.

The outbreak at San Luis Rio Colorado is the hardest-hit area of Sonora, Arizona's neighbor to the south. The state's Health Ministry has reported 371 positive cases in the area ⁠— that's one fifth of all reported cases in Sonora ⁠— and 48 deaths as of Friday morning.

Officials recorded more deaths there than at any other city in Sonora, including the state capital of Hermosillo, which is more than four times the size of San Luis Rio Colorado and had reported 21 deaths.

Mayor Santos Gonzalez Yescas told The Arizona Republic they expected to be hit hard by COVID-19 because of their geographic location. San Luis Rio Colorado is the gateway to the state of Baja California, one of the current epicenters of the pandemic in Mexico.

"Because of our geographic location, by any method or whatever the situation, we were bound to get hit by this problem," Gonzalez Yescas said. "Why? Because we are a point of transit, we're a border community. We're close to such an important state like Baja California, and then also to the United States and Arizona. We knew we were gonna get hit."

Across the border in Yuma County, cases have also been rising rapidly as more testing becomes available. County health officials were on track to record the 1,000th positive case over the weekend. They've also reported at least 15 deaths so far.

Residents in Yuma County are more than twice as likely to contract the virus than people living in Maricopa County, Arizona's most populous county and with the highest number of infections, according to an analysis of reported cases.

"Our cases started significantly later than in other counties in the rest of the state. So we're lagging behind in that edge," said Diana Gomez. She's the director for the Yuma County Health District.

"We expected to peak to around June, first week second week of June. So that's contributing to what we expected to see," she added.

As the number of infections has climbed in Yuma and San Luis Rio Colorado, health officials from both sides of the border stepped up communication and data sharing to track cases jointly.

Health officials in Arizona have also donated medical equipment such as face masks, X-ray machines and mobile units to their counterparts in San Luis Rio Colorado.

"What we see playing out all along the border in the Arizona-Sonora region is the public health community saying 'Ok, we're in this together. And it's not about you and it's not about me. It's about us together,'" Jill de Zapien said.

She's the director for the University of Arizona's Border, Transborder and Binational Public Health Collaborative Research, which is tasked with addressing health needs along the Arizona-Sonora border region.

"They've had that history working together so long that way, that it really shows it's not just a quick superficial relationship. It's one that is really able to stand the onslaught of all kinds of issues," she added.

When the outbreak in San Luis Rio Colorado first began, one of the hardest hit areas was General Hospital, the only public hospital in the city, which treated the first cases.

Right away, several of the health care workers at the hospital fell ill with COVID-19, including the hospital's director. Dr. Joel Godinez who tested positive in late April, but has since recovered and is back to work at the hospital.

He declined an interview, and instead deferred questions to the Sonora Health Ministry. They have not responded to a request for comment.

Enrique Clausen, the spokesman for the ministry, said during his Thursday press conference that two health workers in San Luis Rio Colorado remain hospitalized with COVID-19. At least one nurse has passed away, officials said.

Gonzalez Yescas said that nearly a month ago, Sonora Gov. Claudia Pavlovich sent more doctors and nurses from around Sonora to help with the outbreak in San Luis Rio Colorado.

But the need remains, as the number of cases and deaths continues to grow.

On May 23, Clausen issued a call to action on social media. They're looking to hire more nurses to help staff the General Hospital in San Luis Rio Colorado. The pay, starting at about $900 per month, is roughly three times Mexico's minimum wage.

Gonzalez Yescas is optimistic the situation in his city will improve in the near future. The General Hospital is at 65% capacity, he said, so there's room to treat people. And like Yuma County, they're expecting cases in San Luis Rio Colorado to begin decreasing as early as next week.

"I feel that at this moment, we're starting to flatten the curve, it's decreasing," he said. "I think that by next week, based on the experts, specialist and epidemiologist, are telling us that by next week we'll have a decrease. I hope that's the case."

Unlike Arizona, the state of Sonora has not yet started to reopen shuttered businesses and relaxing some of its guidelines. The mayor said he's concerned cases could rise after that, and urged residents to comply with social distancing guidelines.

The reopening of businesses in Arizona, coupled with quarantine fatigue, is one of several likely reasons for the spike in cases reported in Yuma County, Gomez said.

But the biggest reason, she added, is that testing has increased dramatically. As of this week, county and community health workers have tested more than 8,500 people. There are testing blitzes regularly scheduled around the county.

The testing sites are increasing targeting low income and marginalized communities, especially in the southern part of the county, closer to the border. Residents in these areas are majority Mexican-American, poorer, and includes large numbers of farm workers.

Amanda Aguirre, the president and CEO for the Regional Center for Border Health — a nonprofit clinic providing medical services in rural areas of Yuma County — said they've conducted nearly 7,000 tests in the county.

The center has about 100 staff members testing regularly at different sites. That includes essential business and services such as nursing homes, prisons, and even the U.S. Border Patrol stations in the Yuma area. They've also been providing testing for farmers and farm workers in the region's significant agriculture industry.

The main winter growing season ended before the pandemic began. But there are still thousands of farm workers who live in Mexico and cross into Arizona daily to pick produce such as melons, whose harvest is underway.

Customs and Border Protection officials in Arizona said customs officers are required to wear face masks and other protective gear, but no additional screening measures are in place to target travelers crossing the border.

Farm workers are considered essential workers, and as a result have become a large focus for community organizations like the Regional Center for Border Health that are working to curb the spread of the virus among that population.

Aguirre said they're waiting on the Arizona Department of Economic Security to process farm worker visas for up to 400 workers that will be coming from Mexico.

"We're waiting for them to tell us when all those farm workers will be in Yuma so we can go out and test them," she said.

Other community groups like Campesinos Sin Fronteras, or Farmworkers Without Borders, are providing assistance for thousands of farm workers that stopped working when the main growing season ended in March.

Emma Torres is the group's executive director. She said many farm workers have filed for unemployment with the state until the harvests begin in September, a yearly occurrence in Yuma County. But during the pandemic, it's taken a new sense of urgency.

Torres noted that up 1,200 people line up physically each week at the state unemployment office in San Luis, Arizona. As the outbreak in Yuma began, she noticed that many of them were not wearing masks or physically distancing from each other so they began providing them face masks and water to people waiting in line.

"These are the farm workers that don't speak English, that even if it's in Spanish, they don't feel comfortable conducting things virtually," she said. "They want to see a person that will tell them 'yes, you will qualify.''

Campesinos sin Fronteras also has an established network of promotoras, or community health care workers, that conduct outreach to farm workers in Yuma County. The group keeps an eye out for pressing needs among the workers.

These include basic necessities, like providing food boxes to hungry families or rent assistance so they can remain home. But it also includes more pressing needs that can be easily overlooked.

"We have one family we helped them to ... we paid someone to go and sanitize professionally the home because the person had died at home, and we wanted to help them that way," Torres said. "So we're just really like a watchdog right now, looking at where the more emerging needs (are) that they're not being helped with."

The collaboration between health officials in Arizona and Sonora is not limited to the COVID-19 pandemic, and is not a new phenomenon, according to Jill de Zapien, with the Border, Transborder and Binational Public Health Collaborative Research.

She's been working in Arizona's border communities since 1984, and said previous pandemics and outbreaks, such as H1N1 in 2009, have strengthened partnerships at the local and state level.

"There is an incredible history of binational collaboration around health, and the health departments work incredibly well. They know each other really well," de Zapien said. "Everybody that is in those health departments are long them people that have been involved in public health for a long time."

During the COVID-19 pandemic, health and elected leaders in the Yuma and San Luis Rio Colorado border region have set up regular meetings where they can share information about a range of issues such as testing.

Gomez, in addition to leading the Yuma County Health District, is also a co-lead for the region's Binational Health and Environmental Council. She said that Arizona and Sonora share the Border Infections Disease Surveillance (BIDS), a secure system that allows them to track and monitor diseases such as COVID-19 at the border region.

"We can not only pick up the phone and have that conversation with our counterparts on the other side of the border, but we can enter that information to the BIDS surveillance system and it allows us to do contact investigation in real time on both sides of the border, which I think is key for a situation like this," she said.

Binational health officials in Yuma and San Luis Rio Colorado can also coordinate communication strategies as a region, and look for other ways to help each other.

Aguirre, who co-leads the Binational Health and Environmental Council with Gomez, said her center donated an X-ray machine to the General Hospital in San Luis Rio Colorado when their's broke down, as well as mobile unit to help treat more patients, as a result of those conversations.

"The more we can work together in bringing awareness, the more we can join forces for screening, detecting," she said. "Because if we don't detect and we don't find them, we'll never know how big this is and how it's impacting our communities until we see them in the hospital."

Have any news tips or story ideas about the U.S.-Mexico border? Reach him on Twitter at @RafaelCarranza.