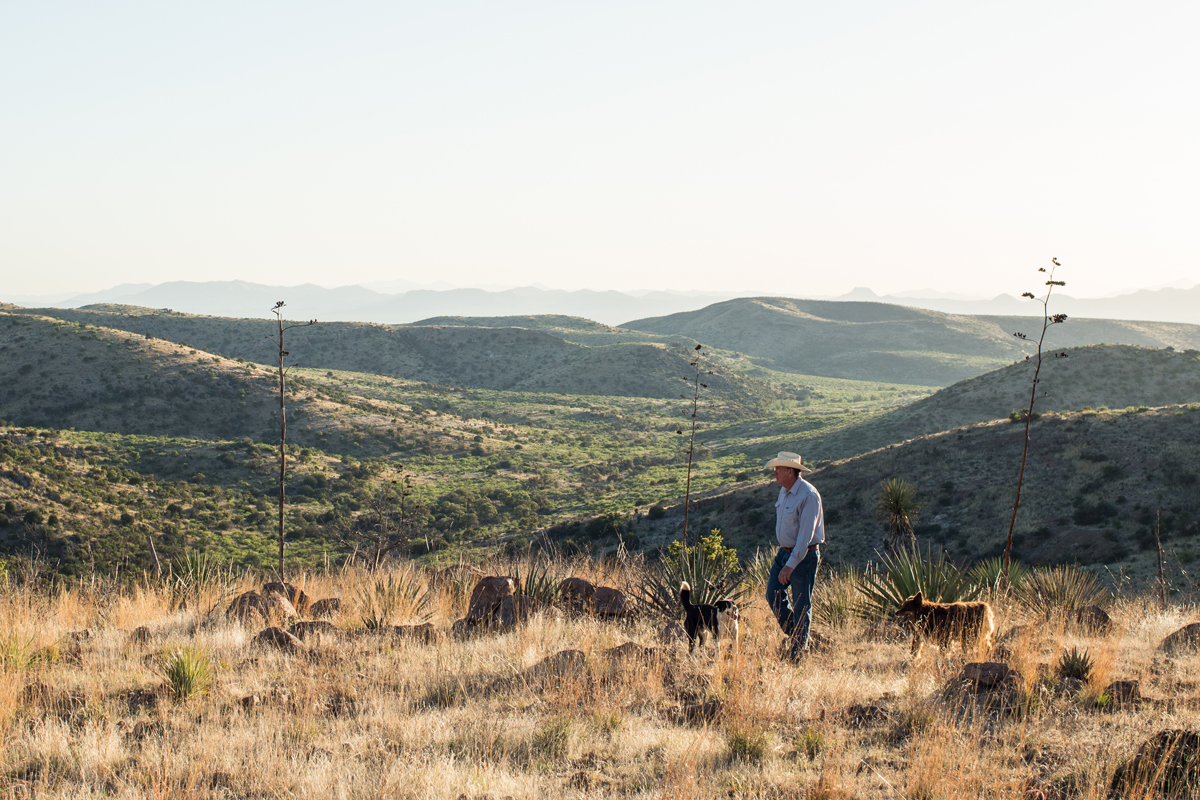 They built a coalition to protect open space. Now, they’re up against the country’s largest construction project.

Since 1994, the Malpai Borderlands Group, a coalition of ranchers, has worked to steward approximately 800,000 acres of rangeland in southern Arizona and New Mexico. The group started with the idea that if its members — ranchers from multiple generations who worked the land — could come together to manage the landscape with other stakeholders, then broader regional decisions could be made with their input.

They have been lauded as a model of collaboration for their work with environmental groups, scientists, nonprofits and federal and state land managers, with the goal of using ranching as a tool for conservation while safeguarding the land’s ecological importance. And for the past two decades, this approach to finding common ground has worked. What was once a tense relationship between ranchers and environmentalists became a strong partnership in the Borderlands.

Ranchers have worked to restore the watershed through a series of small rock structures that slow water runoff during heavy rains, recharging groundwater. A cattle-pond enhancement project aided the threatened Chiricahua leopard frog. The group has received money from the Natural Resources Conservation Service, a federal agency, to enhance water sources for both the ranchers’ cattle and the wildlife that cross through their land, and their work has helped inform regional fire-management decisions. Approximately 86,000 acres of land have been protected through conservation easements, maintaining ecological connectivity in a region that both ranchers and environmentalists feared would be fragmented by subdivisions.

But with three of their ranches located along the U.S. Mexico border near the San Bernardino Wildlife Refuge, there was one development the group’s collaborative efforts couldn’t stop: Trump’s border wall.

In January, as the 30-foot bollard wall was being erected just a few hours away — carving up wildlife habitat, cutting off water sources for animals like jaguars, javelina and mountain lions, and cordoning off open space between the United States and Mexico — the Malpai Borderlands Group gathered for its annual Science Conference in the sparsely populated town of Rodeo, New Mexico.

Attendees listened to experts talk about things like drought monitoring, invasive grasses and wildlife activity. In his opening remarks, Myles Traphagen, the group’s science coordinator, set the tone for the event. He talked about the various geographies that collide here: the Sierra Madre from the south and the Rocky Mountains from the north, the Chihuahuan Desert from the east, the Sonoran Desert from the west and the Great Plains. With the border wall on his mind, he told the crowd of ranchers, land managers and scientists: “We have some serious threats facing us right now, which could potentially alter that long-term evolutionary history.”

In attendance was Bill McDonald, the former executive director and founding member of the Malpai Borderlands Group. He was wearing a red long-sleeved shirt, suspenders and a white wide-brimmed hat. A fifth-generation cattle rancher, he won the prestigious MacArthur Foundation “genius grant” in 1998 for his work in land conservation.

When asked about his thoughts on the border wall, he told me he feels betrayed by the government. The group approached Border Patrol much the same way it pursued relationships with diverse regional stakeholders — through building trust. Until last March, McDonald thought they were all on the same page. The group takes border security seriously; in the early 2000s, some of its ranches were situated along drug-trafficking routes. The ranchers helped the Border Patrol place surveillance towers on their property, and over the years, border crossings fell significantly in their sector. A Customs and Border Protections spokeswoman told HCN that,“while the current apprehensions may be down, CBP reportedly has reasons to believe this area is at high risk for illegal traffic in the future.”

As recently as June, U.S. Border Patrol Agent Dion Ethell, who heads the station in Douglas and who gave updates to the Malpai group, told a local news station that illegal border crossings had fallen to less than 1% of the high of 235,000 in 2000.

So, when McDonald learned that the wall would cut through the open space the group worked so hard to protect, he was shocked. “I personally felt like I kind of failed. I thought we had something there that we didn’t have,” he said. “It’s damaged our relationship with the Border Patrol for a long time.”

In an op-ed published last year, Richard Winkler, the Malpai group’s current executive director, called the wall “a glaring lack of respect for our efforts.” “The fact that local landowners, who actually live on and near the border, have not been consulted, is an affront to the democratic ideals that America was built upon.”

But McDonald said the wall has caused some rifts among the group’s members. Meetings have gotten heated between the majority who oppose construction and the “two or three people in the group that felt strongly (in favor of it),” McDonald said. “They are frankly big supporters of Donald Trump.”

McDonald thinks the group will weather the tension, but he can’t help but take the wall personally. “It hurts,” he told me. He had recently put a conservation easement on his own ranch, something he had wanted to do for a long time. With the wall going up, though, “it just felt kind of hollow,” he said. His land doesn’t abut the construction, but it connects to a neighboring ranch, whose land does. The point of the easement was to protect the open space and strengthen habitat connectivity for wildlife. Knowing that a 30-foot wall equipped with harsh lighting was now going to interfere with that, “it didn’t feel the same,” he told me.

“Now that I’ve been involved with this group, I care about the whole land, not just my ranch, and it is definitely a dagger.”

Jessica Kutz is an assistant editor for High Country News.