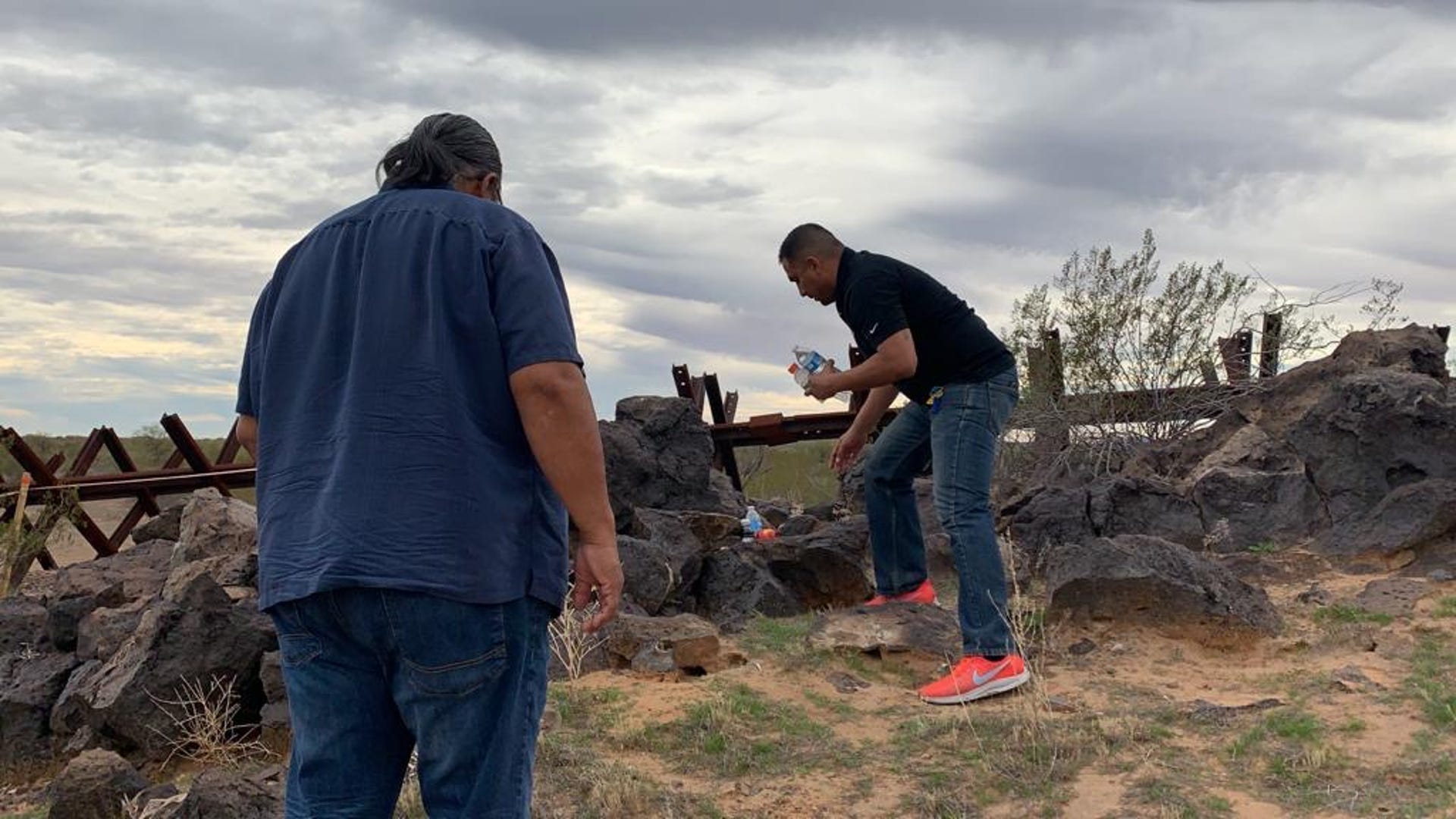 The leader of the Tohono O’odham Nation is once again vowing to fight against the construction of new border fencing along their ancestral lands in southwestern Arizona, as works crews encroach sites of historical and cultural significance to the O’odham people.

Some of the key locations include an ancient burial site located in the immediate vicinity of existing border barriers, as well as Quitobaquito Springs — the only natural source of water for dozens of miles around — where construction crews discovered in October fragments of human remains believed to have belonged to O’odham ancestors centuries ago.

The spring is still used as part of the tribe’s sacred Salt Pilgrimage.

“Regardless that it isn’t within our reservation boundaries anymore, but it’s clear, we have inhabited this area since time immemorial,” Chairman Ned Norris Jr. said. “They’re our ancestors. They’re our remnants of who we are as a people, throughout this whole area. And it’s our obligation, it’s our duty to do what is necessary to protect that.”

Norris led U.S. Rep. Raúl Grijalva on a tour on Monday of the major archaeological sites along the path of construction at Organ Pipe Cactus National Monument and the Cabeza Prieta National Wildlife Refuge in southwestern Arizona.

The visit stemmed from a letter Norris wrote in October to the Department of Homeland Security documenting five of their key concerns with the construction of 43 miles of border fencing west of the Tohono O’odham Nation.

Construction at these historic sites will once again pit the Arizona tribe’s sovereignty against Trump’s desire for increased border security and to fulfill one of his signature campaign promises as the 2020 election looms.

Under federal law, the government is required to notify and work with the Tohono O’odham Nation to remove any artifacts or remains — some dating to as far back as 10,000 years ago — unearthed as construction activity ramps up along their ancestral home, which stretches from the San Pedro to the Colorado rivers.

But in May, the U.S. Department of Homeland Security waived nearly three dozen environmental and cultural laws — including the Native American Graves Protection and Repatriation Act — in order to expedite the construction of 30-foot bollards at Organ Pipe and Cabeza Prieta.

Norris said that despite the federal government’s reassurances, recent experience showed them that the government proceeded anyway without consulting them.

But the stakes are higher this time around, he added.

“How would you feel if someone brought a bulldozer to your family graveyard and started uprooting the graves there? That is the relationship the significance, that is the impact that we see happening here in that way,” Norris said.

The tribe’s concerns over cultural sites in the region add to questions from environmental groups about how construction will impact sensitive areas, such as the San Pedro River.

Work has begun in the area

On Monday, crews with Southwest Valley Constructors of Albuquerque, N.M., continued clearing a 60-foot strip of land north of the international boundary known as the Roosevelt Reservation to accommodate the construction vehicles and materials used to erect the bollards.

Road rollers flattened loose earth and sand while maneuvering around towering saguaros that have already been marked and will either be destroyed or replanted elsewhere. That process has alsoraised concerns.

Grijalva, who chairs the House Natural Resource Committee, has been an outspoken critic of the Trump Administration’s push to waive laws in order to build new barriers at the border more quickly.

He said Monday’s visit allowed him to see how “delicate” some of the sites were. He called the government’s handling so far “disrespectful.”

“When our committee has subpoena power, we’re gonna push a little harder about facts, and the communications, and other things that have occurred that have led to the decisions not to consult and the decisions to endanger some of the sites that we visited today,” he said.

The latter two are located partly or entirely within the 60-foot swath that construction crews are clearing out.  Quitobaquito is less than a quarter of a mile north of the border.

Norris said they’re proposing a series of “buffer zones” around these three sites.

They propose that the existing vehicle barriers be left in place to allow for wildlife to cross back and forth freely, but Norris said they would be reinforced with technology.

The site at Las Playas is located a few miles west of the Yuma County line, just north of the border.

It features an intaglio, a rock formation carved and formed by early O’odham, likely as a ceremonial space, according to Rick Martynec, an archaeologist that has been working on the wildlife refuge for over 25 years.

Martynec said they’ve documented some 160 archaeological sites on both sides of the border along Cabeza Prieta and Organ Pipe, though not all of them lie in the path of border wall construction.

Of the three, the unnamed burial site may pose the biggest challenge for construction crews.

The site is immediately adjacent to the Normandy-style vehicle barriers being phased out, so their removal and the installation of the newer, 30-foot bollards in their place would require crews to either clear or trample the burial site.

Martynec said its unclear how many people were buried onsite, but he pointed to bone fragments strewn around the graves.

“They could make accommodations for certain areas and they’re simply not doing that. They’re not willing to reason at all,” he said. “They’re just moving too quickly.”

As construction moves west, the first key site that will be impacted will be Quitobaquito Springs.

Work has yet to begin in the immediate surroundings. Customs and Border Protection said it will have a wildlife monitor onsite during construction in the area to ensure that any endangered species are not harmed.

They also agreed not to drill wells five miles in either direction of Quitobaquito.

But critics are still uneasy.

Construction along this desert wilderness requires nearly 84,000 gallons of water per day. Since most of the water is coming from the wells, there are concerns that pumping groundwater could deplete the water tables that feed Quitobaquito.

In December, the National Park Service installed an upgraded system to better monitor water levels at the spring in anticipation of construction.

Norris said bone fragments recovered in October from Quitobaquito are currently in the custody of the National Park Service. Once the tribe gets them back, the tribe’s leaders will rebury the fragments at another location they won’t disclose to the public.

Have any news tips or story ideas about the U.S.-Mexico border? Reach the reporter on Twitter at @RafaelCarranza.