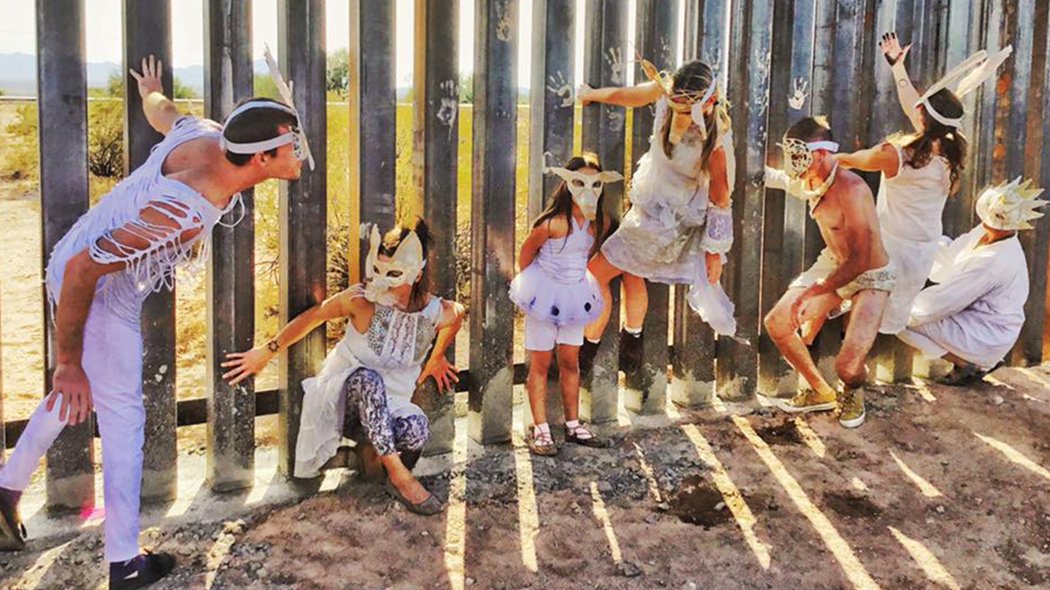 At Organ Pipe Cactus National Monument today, 320 people of different nations, races, cultures and faiths peacefully came together to grieve the new construction of an unneeded border wall. Its construction activities are already cutting off access to water for the survival of people and wildlife, are violating native and other place-based spiritual practices, and are destroying ancient cactus and ironwood forests.

At Quitobaquito springs along the border–once the most biodiverse oasis in the entire Sonoran Desert– the cumulative destruction of this ancient biocultural landscape has bladed away nearly a third of its former areal extent over the last 60 years. As one O’ odham woman whispered to me –in shock –as she stood over the carcasses of bulldozed saguaros, “They are destroying our ancestors. For what?”

As several of us reiterated in our prayers, poems, songs and speeches before the peaceful assembly staged near the parks visitors center, Homeland Security began constructing the wall only by suspending 41 state and national laws, but two court cases are still pending. Nevertheless, Homeland Security is rushing along with wall construction before these issues are legally settled.

Nevertheless, consider that Homeland Security officials may be in violation of the Constitution and its protection of religious freedoms by fast-tracking the disruption of place-based spiritual practices and destroying the material needs and the sanctity of those living, on-going place-based religious traditions. We also contend that Homeland Security is in violation of international human rights laws and natural “higher laws” that guide all of Creation.

But as visitors today to a park that is also a UNESCO biosphere reserve and wilderness area, people of at least 5 cultures still heeded the lower laws, obtaining permits and respectfully following law enforcers guidance. This was no motley crew, it was a multi-cultural community in mourning, just as you might see at a wake or memorial service.

We stood on high ground today in the blessed desert. We pray that they will do the same.

Overall, it was a blessing to see so many people from different faiths, languages, and walks of life convene in solidarity with the O’odham youth and elders who offered us their perspective as original inhabitants of this landscape. There were peace and justice activists from Jewish, Buddhist, Muslim, Catholic, Presbyterian, Quaker and Episcopalian faiths present in number. They understood that when one cultural community sees the sanctity of their sacred sites and ceremonial grounds desecrated by capricious governmental decisions, we all worry that our religious freedoms and human rights may be put at further risk.

We cannot simply wait to see what the courts decide, for we need to begin the compassionate, rational and legal planning to protect, restore or re-consecrate other vulnerable sites along the border as soon as possible. As Kevin Dahl of the National Parks and Conservation Association has prophetically envisioned, it is time to begin thinking of effective ways to legally decommission the wall. We need to find ways to recycle its metal and concrete, to restore the desert to its former diversity and to have native leaders re-consecrate its sacred sites that have been violated by this temporary lapse of moral judgement in our government’s part.

In my heart and soul, I urge the Army Corps of Engineers and Homeland Security to use their existing budgets to pay the National Park Service and affected tribes to begin these efforts toward healing the wounds in the desert and re-sanctifying sacred sites. Restorative justice–not further acrimony or rancor– should be the next step. This borderland is respectfully shared by many cultures, many kinds of wildlife and plants, and by many spiritual traditions. Together, they give the Sonoran Desert its integrity, beauty and sacredness. Pray for healing. Pray that the wounding will cease.