Posted on September 26, 2019 Posted By: Gary Nabhan Categories: Biodiversity, Destruction of the Land and Natural Resources 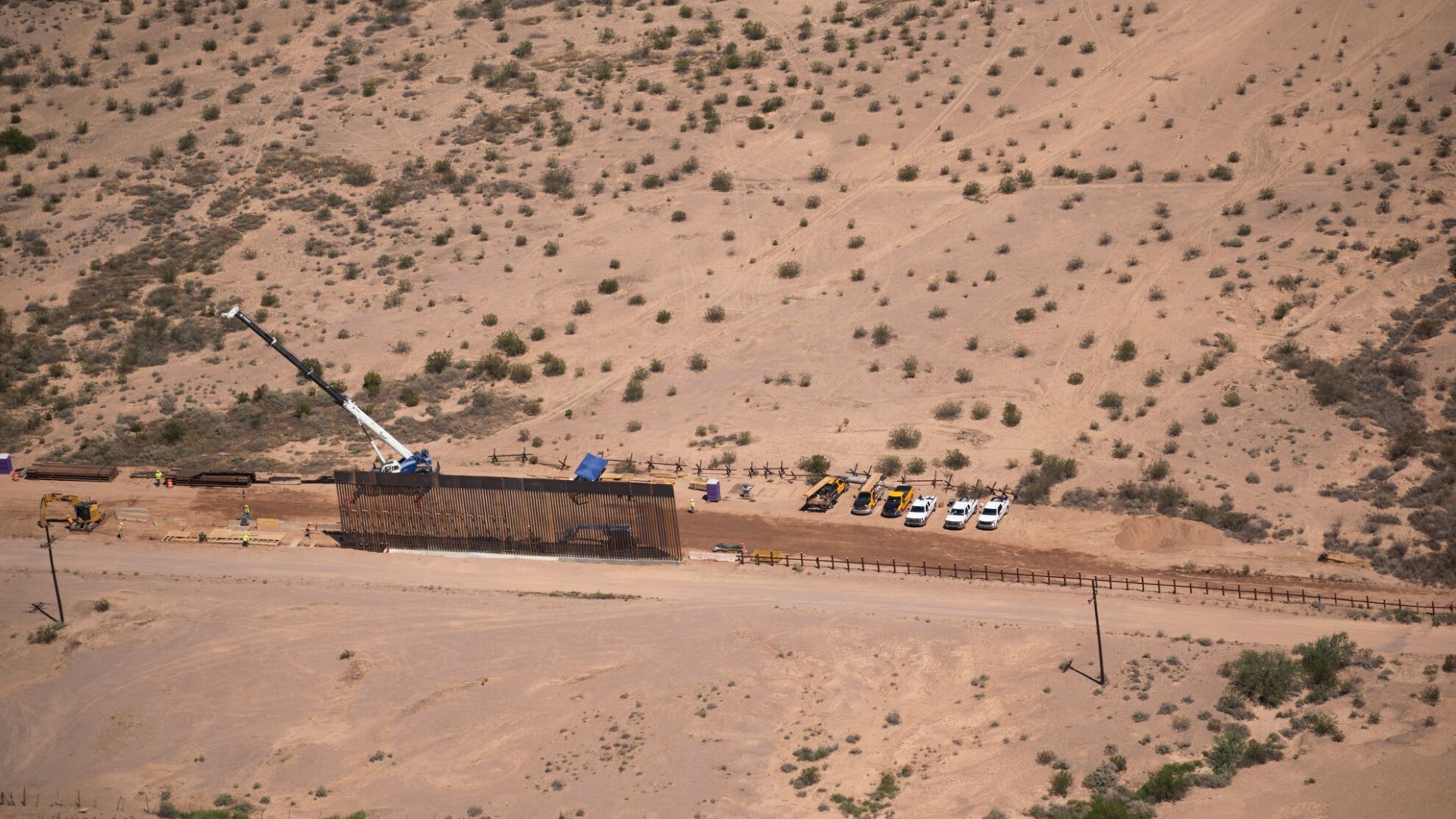 The decline of a rare cactus in a national park epitomizes the Trump administration’s failure to protect endangered species along the border.

Construction is underway on a 30-foot-high steel wall along Arizona’s southern border in Organ Pipe Cactus National Monument. As several reports have recently warned, the wall will hurt many endangered desert species, from Sonoran pronghorns to cactus ferruginous pygmy owls. To understand how the wall will further fragment habitats for these already-declining plants and animals, let’s go deep with one rare species that’s at grave risk: a cactus called the night-blooming cereus.

Sacamatraca, a beautiful and rare cereus known as Peniocereus striatus, has declined markedly over several decades and is highly threatened in much of its range, according to the International Union for the Conservation of Nature. Its scattered populations are often small — roughly 50 to 200 plants — and widely separated from each other. An important population of about 200 of these cacti finds its home on the southern border of Organ Pipe Cactus National Monument. 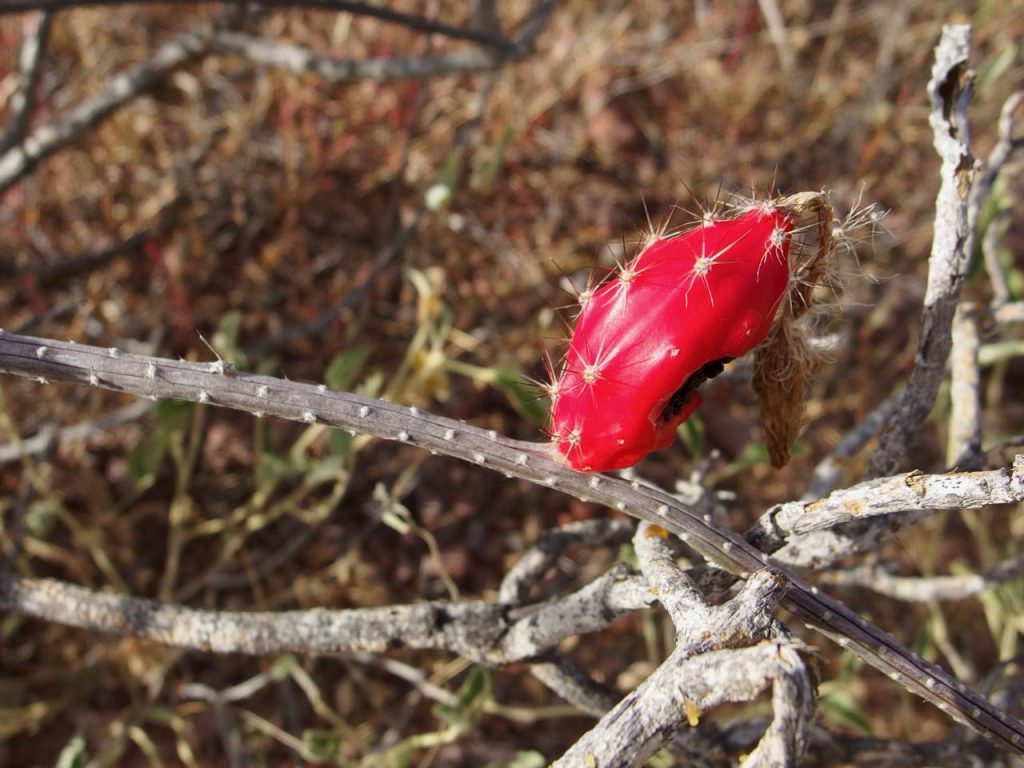 This binational cactus patch was even in trouble before Trump’s call for a wall.

Why? The answer lies in the border that fragments nature’s cohesiveness. In 1849, when the Gadsden Purchase drew a line through the middle of the Sonoran Desert, roughly half of the cereus cacti along the Organ Pipe border became U.S. citizens, while the others still lived under the flag of Mexico. Over the past few decades, construction of roads in the United States and irrigated farms in Mexico have destroyed about one-tenth of the original population. Even more habitat has been degraded. Wood-cutting by Mexican families to heat their homes and cook food triggered further cactus declines by eliminating host plants the cereus cacti needed to survive.

When I first noticed the mortality 25 years ago, I asked the brilliant Mexican ecologist Humberto Suzán Azpiri to help me study this threatened borderline cereus population. At that time we had full cooperation from both Mexican and U.S. officials, including the biologists and law-enforcement staff inside Organ Pipe. With their permission we spent hundreds of hours in the field on both sides of the border, detailing the causes of the decline and planning possible solutions.

Each night we surveyed opposite sides of the border as darkness fell to catch sight of the gorgeous, ghost-white blossoms of the cereus emanating from what otherwise looked like dead sticks. 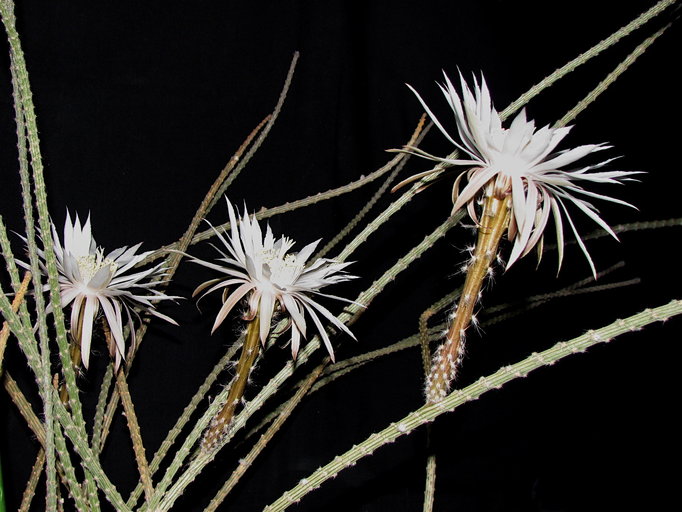 We passed our research equipment back and forth over the waist-high vehicle barrier and collected data on floral blooms, visiting pollinators and seeds. We learned that on any single night, each cereus flower had fewer than a dozen potential sources of pollen from neighboring cacti on either side of the border. We learned that moths would fly up to 300 yards between flowers to gather nectar and deposit the pollen essential to fruit set.

Out in the stinkin’ hot desert, that’s a pretty long distance for pollen to travel from mate to mate.

When our technical paper on the effects of habitat fragmentation on the cereus cacti came out in Conservation Biology, we concluded that international cooperation would be critical to preserving host plants and allowing for pollination by sphingid moths — the two key factors for the survival of the cactus.

Now our capacity for transborder monitoring of this binational population has been fragmented. Though we remain fast friends, Humberto and I will never be able to replicate our first study with an impenetrable wall and two sparring government bureaucracies between us.

But it’s not just the collaborations of transborder conservation researchers that have been lost. The true danger is to the plants and animals that live there.

Border-wall construction will clear more landscape along the border and inevitably knock out more cacti. For each mile of wall, more habitat will be bulldozed for “enforcement zones,” then paved with high-speed patrol roads, staked with sensors and blasted with 24-hour flood lighting.

Both the 30-foot steel bollard wall and the flood lights will doom “collaborations” between hawkmoths — the co-evolved pollinators of the cacti — and the cereus themselves. Hawkmoths spend most of the night flying at heights of 9 to 30 feet, trying to sniff out cactus floral scents.  For the moths that can make it over the 30-foot barrier, their perception of the flowers and their attractive scents will likely be disrupted by lights, noise and dust from construction.

Organ Pipe Cactus National Monument is not the cereus’ only habitat, but similar situations will play out throughout their range and across the length of the border. New walls will disrupt ecosystems, stop wildlife migrations and push dozens, if not hundreds, of species in the borderlands closer to extinction.

And so the sacamatraca cactus has become “the canary on the border line,” foreshadowing localized extinctions as an immediate example of how border walls will harm plants and animals.

This unprecedented, lit-up, 30-foot monstrosity is a nightmare in the making, but it’s not one that either the Park Service or local Customs and Border Protection has recommended. There are already “Normandy barriers” that effectively block vehicle passage into the United States but do not fragment habitat or stop wildlife migration. Border Patrol has hundreds of cameras and sensors scattered throughout the wilderness, amounting to a complex network of surveillance technology. We already have a virtual wall — and one that’s far more effective than a medieval bulwark.

So what is the true price we’ll pay for an unneeded, frankly absurd wall in a national park that’s being built only to fulfill an uninformed political promise?

For one, it’s 624 million taxpayer dollars, and that’s just for the stretch along the park border.

But the true cost also includes things that are priceless: a cactus with a brilliant night blossom that makes a sphinx moth swoon; disrupted relationships among plants, pollinators and seed dispersers; and a half-century of cooperation among Mexican and U.S. biologists who now fear that their collaborative conservation efforts are all for naught.

The story of the sphynx moth and the night-blooming cereus is just one small tale in this looming national tragedy. From the desecration of Indigenous sacred sites to the scar it will cut across our public lands, the border wall will leave devastation in its wake.